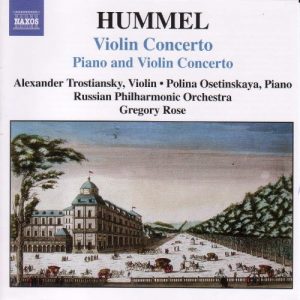 Johann Nepomuk Hummel was considered one of Europe’s finest pianist-composers. Occupying the fascinating interim period between the Haydn–Mozart era and the great violin works of the German romantic composers, Hummel’s only Violin Concerto, heard here in a completion by Gregory Rose, is remarkable for a virtuosic solo violin part in the two outer movements and a beautiful, gentle Adagio where the lyricism of the solo instrument would not be out of place in an opera. The Piano and Violin Concerto, Op 17, is noteworthy for the delightful interplay between the two solo instruments. It is played here by Alexander Trostiansky, a prize-winner at the Premio Paganini and the Tchaikovsky Competition, and by the precociously gifted Polina Osetinskaya, winner of the 2002 Triumph Award for her outstanding contribution to Russian culture.